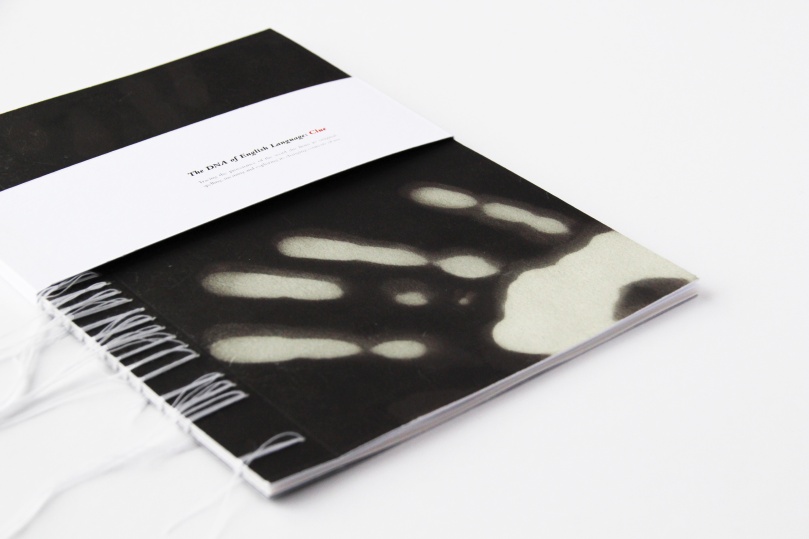 This brief was set by ISTD (International Society of Typographic Designers) in 2017-2018 and I chose this project in my third year of study of Graphic Design. I chose this brief because I wanted to work on my typographic skills and to consider the storytelling process within reading experiences. I would like to have a career in editorial/ print design in the future and felt that this project would allow me to explore layout and communicating ideas to a user.

Trace the history of a word, group of words or phrase and show where it came from – its provenance – how and when it became part of the English Language and how its meaning, use, spelling and punctuation might have changed in the process.

A ball of thread or yarn. (Originated from Greek Myth Theseus and the Minotaur)

A ball of thread or yarn.

A piece of evidence or information used in the detection of a crime.

A fact or idea that serves to reveal something or solve a problem.

A word or words giving an indication as to what is to be inserted in a particular space in a crossword.

Forensic scientists rely on chromatography to analyse fibres that are found in a crime scene. I used this technique for typographic experimentation by printing out the word clue and applying fine liner to the letters to get the ink to run. I then hung the paper into a glass of water for a couple of minutes. The images above show the result which has been edited with different effects to change the finish.

The experiment above was created on the sewing machine with a blackletter type to reflect the typographic choices used in the 14th century when the spelling “clew” was commonly used.

I wanted to reference the original definition of the word in its initial context of being used in the myth of Theseus and the Minotaur where the string/ thread is used to navigate out of the labyrinth. 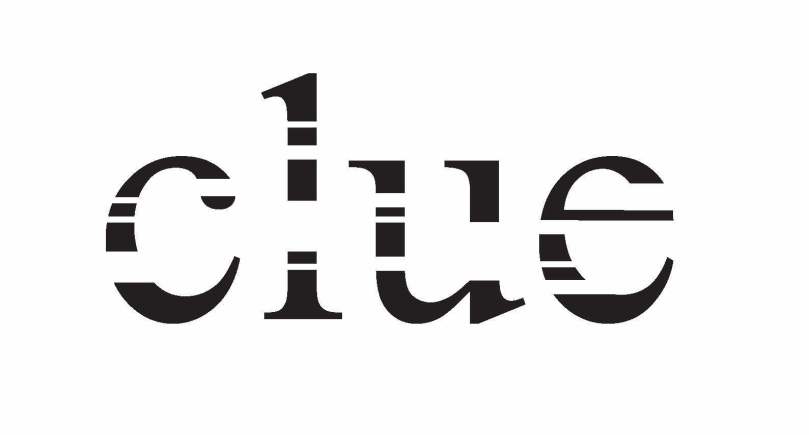 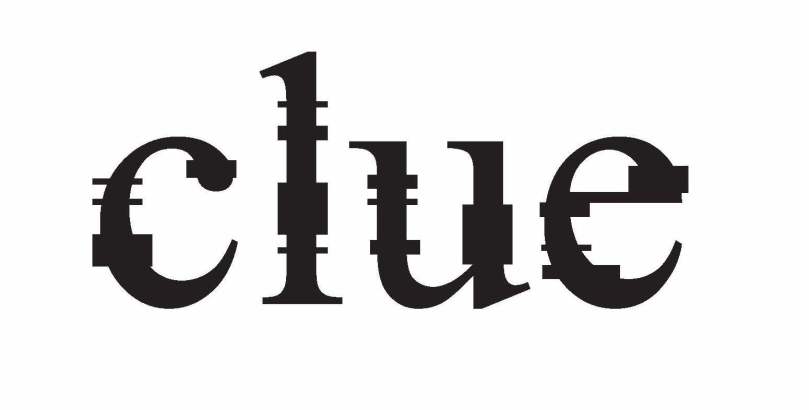 For the experiment above, I collected dust from a surface and mapped out a section of “The Secret Advisory” by Agatha Christie. I was testing different techniques for collecting evidence to be used as clues. 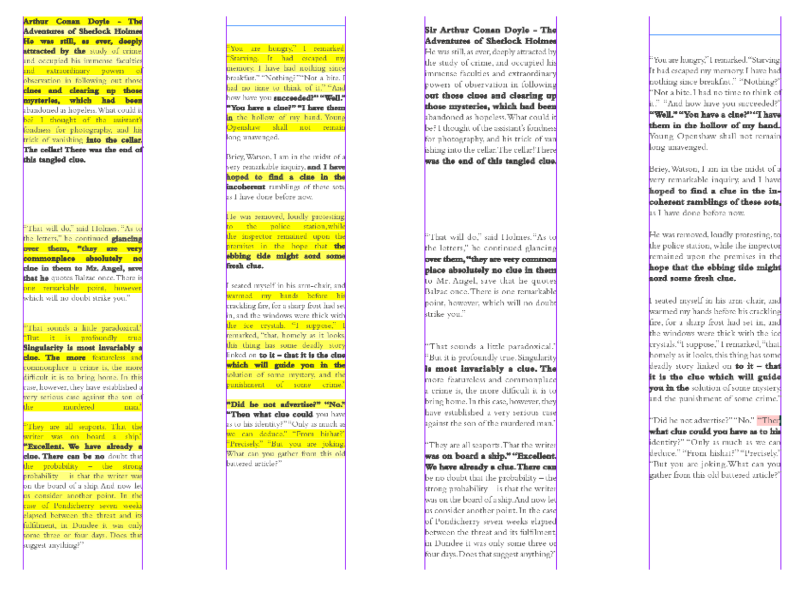 I created experiments using literature content from different eras in history. I chose the texts by identifying the key years for the change of the word clue and found a text which used the word clue during those years. I tried to identify a range of different texts that used clue in different ways to exemplify the differing contexts of use such as sailing/ Greek mythology and crime fiction.

The poster designs use columns with different font weights to create the strips of DNA. 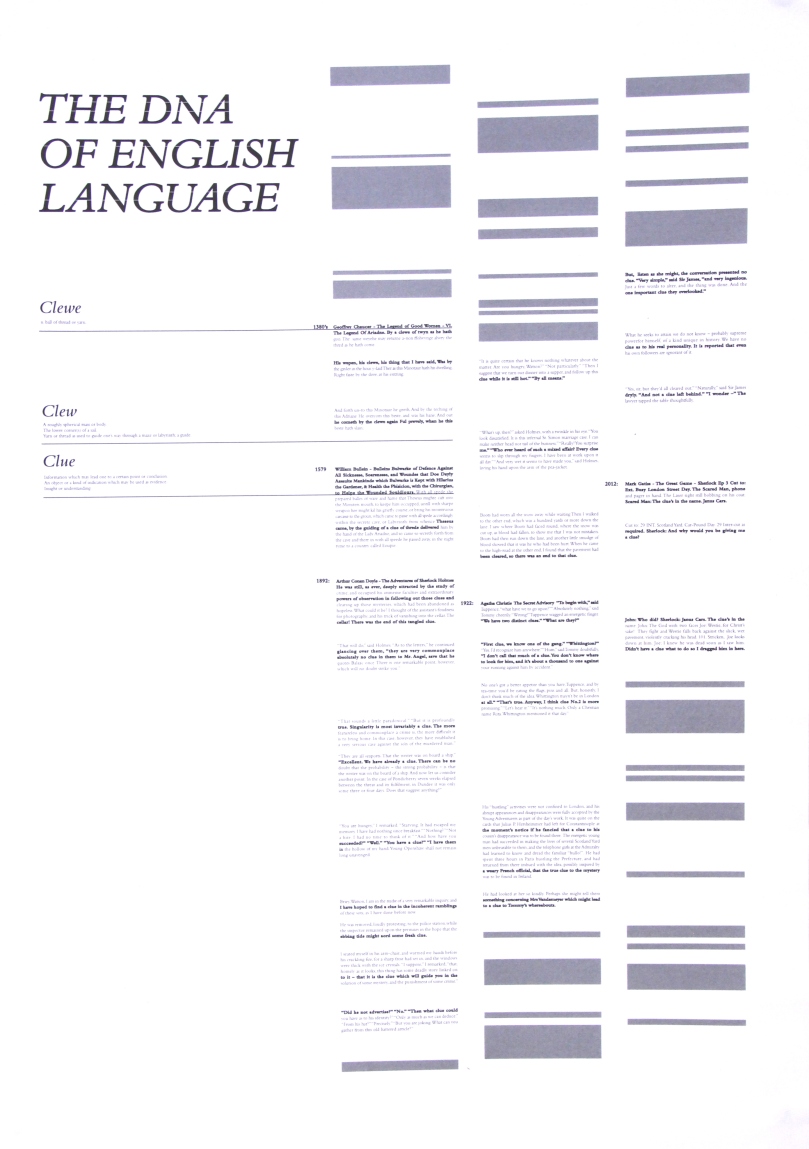 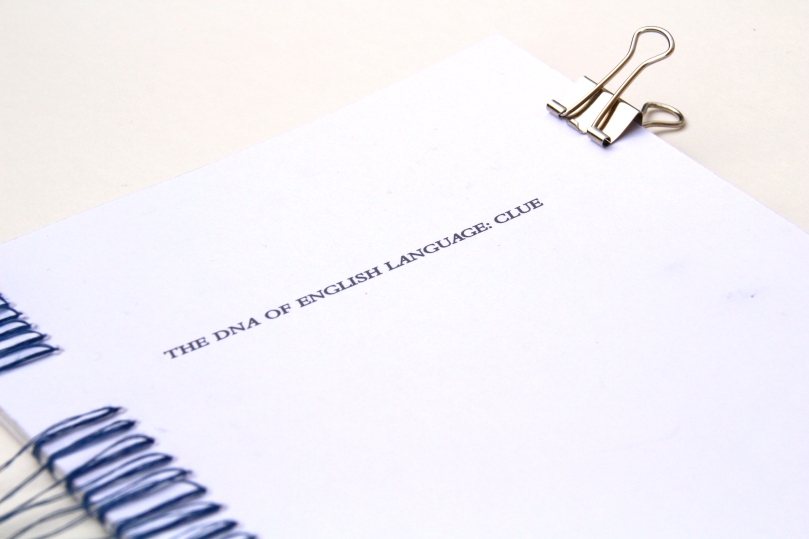 I chose to use Bembo as a font because:

– It is a British Typeface and I believed that this was a requirement because I am basing my outcome on specifically English Language.

– It was designed in 1928-9, which was during the Golden Age of Detective fiction and therefore, the rise in use of the word clue was key at this stage from the increase in reading of crime novels.

– Bembo was also based on a design cut in the 15th century, which is around the time that I am beginning my Literature content from as the first key texts using the word clewe.

– It is an old serif font, and I believe that it matches the style of many inside pages of crime fiction books and looks traditional which fits with the historic approach that I am taking by looking back to the origins of words. 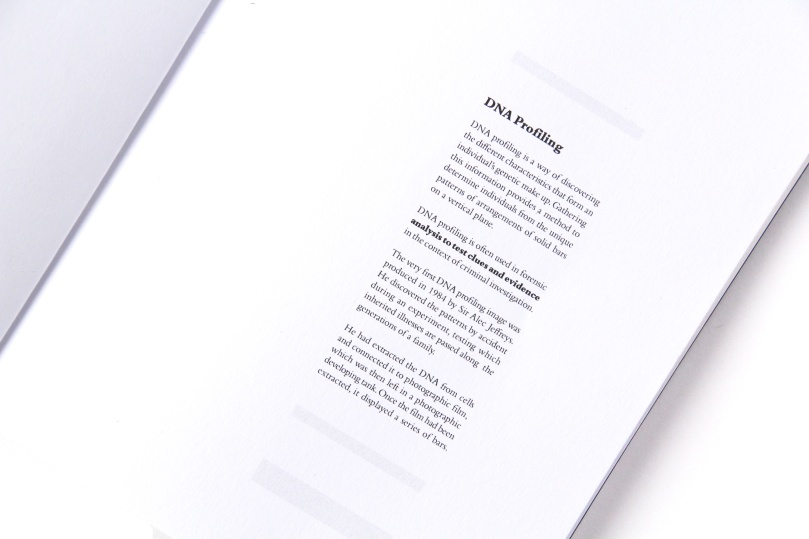 A typographic book mapping the history of the word clue though English Language. The history of the word is portrayed through literature texts which are on layered pages of tracing paper to create strips of DNA profiles. The DNA profiles represent the genetic make up of the word, showing the different characteristics that are inherited from different eras through its history while also reflecting a forensic technique for investigating clues.

Thread is used for the binding to tie in with the original definition of the word clue as a ball of thread or yarn. The cover is painted with thermochromic ink which leaves a temporary trace of the readers hand prints from their body heat when they handle the book.

I chose to bind my book with thin white thread to represent the original definition of the word (clewe) to mean a ball of thread or yarn which was part of an Ancient Greek myth “Theseus and the Minotaur” where Theseus takes the thread into the Labyrinth in order to find his way out again after killing the Minotaur. This is the first piece of literature that is displayed in the book.

I felt that I could represent the timeline as a pattern in the binding to relate to the inside content by the omissions of thread to mark the points.

For the cover of the book, I have used thermochromic ink with a cut out to show the title of the piece as a way to reveal information and as a block to refer to the shapes that are used within the book.

The user would read and handle the book and the body heat fom their hands will reveal hand/ finger marks recreating the leaving of traces on the book as evidence/ clues of someone interacting with the book..

This mark will gradually fade as the book returns back to room temperature. This allows the process to be repeated for whoever handles the book so can be done more than once and personal for each individual user.

Timeline down the side

A timeline of key events have been added to the left side of the main content to show the key moments that influences the use and popularisation of the word.

I designed this as an activity which the reader uses the first of the two pages to see the clue for each word for them to try and decode the event. The year is also provided as a clue. On the second of the two pages of the text, the answer is provided by layering over the top.

As the reader progresses through the book the older spelling variations (clewe and clew) become less visible as each page is turned. By the end of the book the reader can no longer see the clewe spelling because in todays English language it has completely dropped out of usage however, the spelling clew can still just about be seen through the paper as it has decreased in usage but is still  part of the English language. The spelling clue can be clearly seen because it is the current variation of spelling. 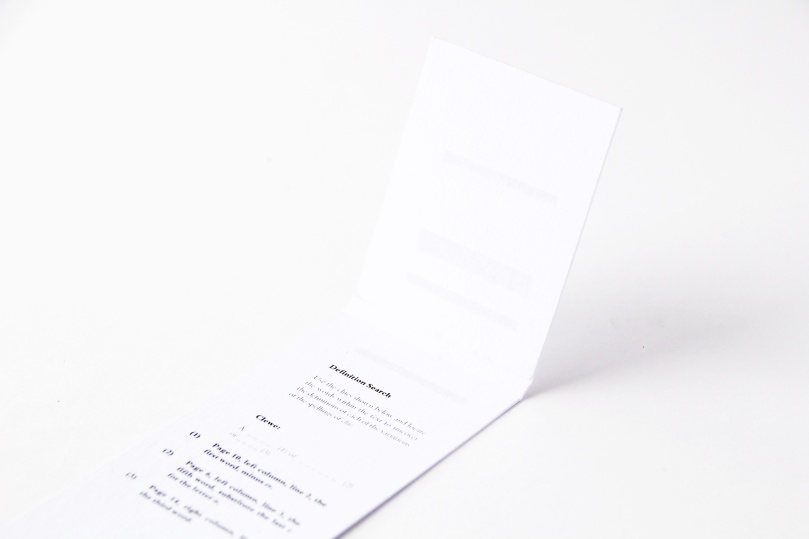 The sleeve wraps around the to show the title and provide a clue into the content of the book as the cover is completely black painted with thermochromic ink. Clues are small things that are part of something larger and often left and disconnected from their larger self, which is what the sleeve is able to represent. On the inside part of the sleeve is an activity for the reader to take part in as the investigator to search through the text and solve clues in order to find the 3 definitions of clewe, clew and clue.